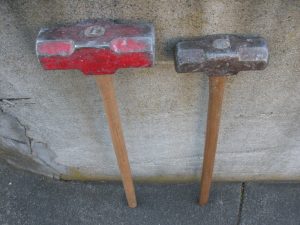 What is “ego”? The part that thinks of itself as “I”? Ego is basically a tool for existing in this world. Ego is the tool that we create in order to perceive a coherent world and be able to communicate about it with others, who have developed the same tool, in a coherent manner. It is a perception and communication tool.

Now, why do we associate with it? Or, rather, why do we allow ego to take over and associate itself with the totality of our being? This is the same as if I made a hammer, held it up and say “I am hammer!” and the other hammer next to me would go “Hey, nice to meet you! I am a hammer too!” People who associate themselves with various objects and tools usually end up you-know-where for being incoherent with our common agreement that we must associate ourselves with a single universal tool – the ego. The situation is insane. Well, it is perfectly sane from the point of view of the hammer ego but it is insane from the point of view of the human being.

We develop a very complicated and beautiful tool, it is a wonder that allows us to talk about this world, have conversations through other tools of the same kind, enjoy all sorts of things and suffer enormously from the hole deep down that keeps reminding us that we are not the tool. Yes, the tool is wonderful, but it remains a tool. No matter how beautiful the tool is we should be able to put it aside at will. Now that we made the tool, the task is to unlearn it, to make us able to put it down and pick it up when necessary.

Now, how does one disassociate oneself from one’s ego?… -->

I came across a very interesting discussion of “Consensus vs. Collaboration” which summarizes neatly why consensus isn’t always the best approach:

In consensus cultures people are rarely excited or supportive.  Mostly because they are very frustrated at how slow things move, how risk-averse the company is, how hard it is to make a decision, and especially how unimpressive the products are.

I saw quite a lot of that, and not only in Japan, so, yeah, that’s the way things are. And the bigger the company, the more pronounced this effect becomes.… -->

I suddenly noticed a spike in the number of visitors here over the weekend. Being a curious one, I naturally wanted to figure out what prompted the sudden attention. Well, it turns out that I had many visitors searching for nothing else but “sex party” and I have a post about that silly sex party by Ergo last year. So I guess the visitors were fairly disappointed with what they saw here.

Makes you think how relevant the search results actually are. We have no idea how to compare them and what to compare them to. When people get this site and they are looking for sex parties, they definitely not getting their time’s worth in information. Search engines by now are very advanced, I hear, they have been around for at least a couple of decades. And still, we get disappointing results. This must be a really hard problem without a good solution yet.

My hunch from here is simple: do not discount the lists of subjects and other alternatives to search engines yet. All the hype about search engines ruling the Internet is just hype, looking for the information is still not simple and we should not limit ourselves to just a search engine.… -->