Amazon has faced an interesting problem in Japan, like everywhere else: the boxes that Amazon delivers goods in are always big, they are much bigger than the goods when the goods are small. The box comes filled with packaging materials, paper and plastic where you fish for your goods. This is done for logistical reasons as handling large uniform sized objects is easier. The downside is, of course, that Amazon standardized on a box that’s way too big to fit in any of the letterboxes world around, causing grief to delivery companies, post offices and customers. Not to mention the amount of waste.

How do you think Amazon handled the problem? Do you think Amazon downsized the shipping boxes to save on materials cost? Do you think they were nice to the post office and customers and introduced a smaller packaging that would fit the letterboxes for the smaller objects? Nah. That’s not Amazon way.

Amazon started selling new letterboxes in Japan last year that are designed to be large enough to accommodate Amazon’s own post. How is that? They now set the rules: “Here is the post size that we will send to you and, here, buy this box to replace yours because we designed it to actually be big enough for our post.”

All in the name of “efficiency”. Of course. 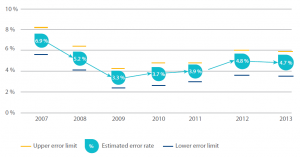