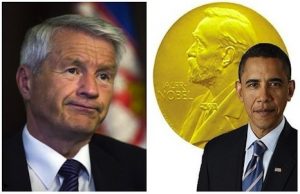 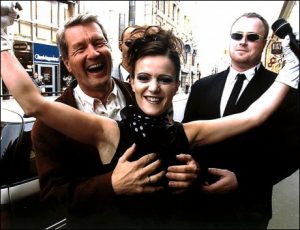 The White House had no comment. It later announced an aggressive new covert CIA initiative to identify and apprehend Al Qaeda operatives in Scandinavia.

Hilarious, I wish it was true :)
Source: Nobel Committee Asks Obama “Nicely” To Return Peace Prize
And there is more:

The Nobel Peace Prize Committee has twice asked President Obama through diplomatic channels to return his Peace Prize. Now they’re asking “one last time” and there’s nothing diplomatic about it.

Nobel Committee Chairman ThorBjorn Jagland addressed an overflow press conference this morning in Oslo. The normally urbane Chairman referred several times to the President as “Obomber”, compared his “re-invasion” of Iraq to that of “the sniveling war-criminal Dick Cheney” and demanded that his Peace Prize be returned to the Committee forthwith together with the “beautiful box” it came in.

Two years ago after the bombing of Libya, the assassination of Osama bin Laden and Guantanamo remaining open, the Committee quietly asked the President to consider returning his Peace Prize, in a brown paper package by regular mail if he preferred so as to avoid embarrassment. They heard nothing from the White House.

In 2013 as US drone attacks increased dramatically the Committee tried again to get Obama’s medal back adding that he could keep the very expensive box it came in. They even offered him a Consolation Nobel Peace Prize. Still nothing.

Now according to Chairman Jagland it’s “No more Mr Nice Guy” Unless the Peace Prize is returned immediately, he announced total cut-off of all Scandinavian exports to the US. “Not a single Volvo or SAAB or attractive wool cap with fake wool pigtails will find its way to American ports! Not one Swedish meatball will ever again pass American lips!”

White House spokesman Josh Earnest responded to the threat: “Actually the President doesn’t remember winning the Nobel Peace Prize. But if he did, he thinks he might have given it to Hillary.”