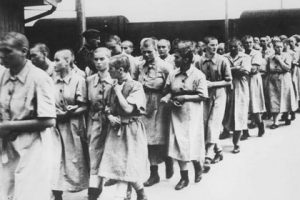 Russian Defense Ministry has posted on its website 15 unique, including secret, historical documents from World War II, concerning, in particular, the liberation of Auschwitz. This was reported on the ministry’s website.

“Publication of documents for the release of prisoners of Auschwitz concentration camp and the occupied territories of Poland by the Red Army is a continuing effort of the military history department, aimed at the preservation and protection of historical truth, prevention of tampering with the history and attempts to revise the results of the Great Patriotic War and the Second World Wars,” – Russian Defense Ministry said in a statement.

Materials, revealing the course of military operations and the liberation of Poland in January 1945, include combat reports from the command of formations and units of the 1st Ukrainian Front, including the Journal of hostilities of the 472 th Infantry Regiment, as well as reports of chiefs of the political departments of the 100 th Infantry Division and of the 60th Army – directly involved the release of prisoners of Auschwitz concentration camp.

Issued is also a report on the socio-demographic characteristics of the troops of the 60th Army of the 1st Ukrainian Front. It contains information about the soldiers of the Red Army, a total of 39 nationalities – Russian, Ukrainians, Belarussians, Armenians, Ossetians, Georgians and others. 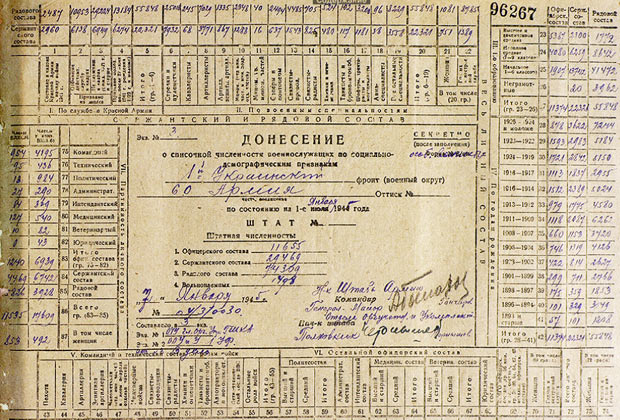 Photo by press-service of the Ministry of Defence of Russia

Some of the documents were previously in a secret storage and were only available to a limited number of historians.

“In recent years there is a lot of speculation around the historical events in the West propagated by various political interests; there appear statements questioning the decisive contribution of the Red Army in the liberation of prisoners of concentration camps, attempts to erase the memory of people of the atrocities committed by the Nazis at Auschwitz and at the same time desecrate the cherished memory of the millions of human lives and fates of dozens of countries milled on the fascist conveyor of death, “- said the Ministry of Defense.

Auschwitz concentration camp (German name Auschwitz-Birkenau) lasted from 1940 to 1945. During this time, according to official figures, there were killed 1.4 million people, of whom about 1.1 million – Jews. Auschwitz prisoners were released on January 27, 1945 by soldiers of the Red Army. In the liberation forces took part the 1st Ukrainian Front (was formed by renaming the Voronezh Front) and the 4th Ukrainian Front (created on the basis of the Southern Front). During the Great Patriotic War fronts names were assigned to the area of their activity and not by nationality of those who served as soldiers.

Today the museum on the site of the former concentration camp hosts events dedicated to the 70th anniversary of the liberation of Auschwitz.