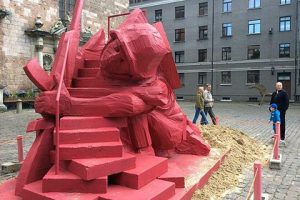 During World War II, Latvia has formed two Grenadier Divisions of SS. One of them, 15 Waffen-division (1st Latvian), fought in 1943 in the northern sector of the Eastern Front and in the spring of 1945 receded in Germany. Another one, 19 Waffen-division (2nd Latvian), took part in the fighting in the Pskov region and existed from 1944 to 1945.