“The real cycle you’re working on is a cycle called yourself.” 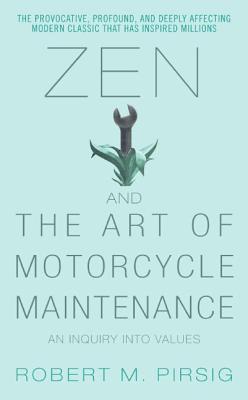 One more completely misrepresented book in our world. This book is typically described as a “travel book”, meaning that it contains a travel description, which it is anything but. This is, au contraire, a philosophical treatise explaining the intellectual path to the enlightenment and the state of human “grown-up”. And as the first quote rightly sums it up, the book is about working on yourself and not about motorcycles.

Pirsig claims that he took the name Phaedrus accidentally, meaning to take the Greek word for “wolf” but ending with “bright” by accident. With all due respect, I don’t believe in accidents. “Phaedrus” stands for “enlightened” and that is who he is. The book contains interesting allegories that explain well how the human awareness comes to existence, how we perceive the world, and how we do it all wrong.

The book has a lot in common with other philosophical and mystical books in that it also describes the path to the enlightenment that a person must take. The path that results in discarding of ego, discarding the very idea of who you are and unlearning everything you learned to start understanding the world.

He wanted to free himself from his own image. He wanted to destroy it because the ghost was what he was and he wanted to be free from the bondage of his own identity. In a strange way, this freedom was achived.

And all of the wisdom is described in a very natural (for our culture) “scientific” language that rings true to the ears of the modern man. The examples are everyday things that one can easily relate to and analogies have true meaning for the man of today. This scores a lot of points when compared to somewhat cryptic Eastern books or works of Carlos Castaneda.

One of the important things that the book mentions is a clear distinction between the glorified self-interest and the true growing-up, the true desire of enlightenment. That self-glorification is the disaster of the today’s world.

Any effort that has self-glorification as its final endpoint is bound to end in a disaster. […] When you try to climb a mountain to prove how big you are, you almost never make it. And even if you do it’s a hollow victory. In order to sustain the victory you have to prove yourself again and again in some other way, and again and again and again, driven forever to fill a false image, haunted by the fear that the image is not true and someone will find out. That’s never the way.

The book finally explains where the miserable state of mind of the modern society comes from, how people lost their sense of unity with the world and their understanding of life in the fight for more objects to own. The life is not what we think it is and to understand it we have to step outside the normal psychological landscape of the modern man, and stepping outside means becoming insane for those remaining inside. Although one has to agree that insanity and sanity are relative judgements and it is more likely that we are all insane living in the psychological landscape we created and support.

Great book. Read it even if you never read anything else. It has it all.