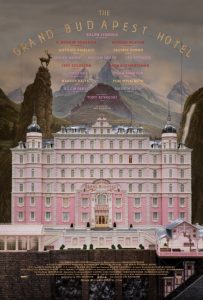 I watched another movie just before I watched “The Best Exotic Marigold Hotel” but it was really so silly that I nearly forgot to mention it. It’s “The Grand Budapest Hotel”, another hotel movie, so to say. Technically, the movie isn’t really all that bad, although it is shot in the theater style, more like if you are watching a show at a theater with a story being told in the background, rather than a first-hand experience typical for a movie. That particular way of filming isn’t new and it is not a problem, it is even curious and entertaining. The problem is the story itself.

Typically, you would expect a story to teach you something, to tell you something new or entertaining, expand your horizons or reinforce your moral values. A movie is just a way to tell a story. Now, this particular movie does not really have a story to tell. It tells you that being stupid can actually work, it tells you that you can count on large inheritances from old ladies if you entertain them, and it tells you how important it is to have protection from the powers above you. Huh? And all of that in that weird theatrical way.

Frankly, if this was a farce, I could understand. The problem is it seems to pretend to be a serious movie while remaining a farce. And it fails miserably at both. Even more, I think this is one of those movies that actually actively destroy the human culture. I think censorship isn’t a bad idea after all…… --> 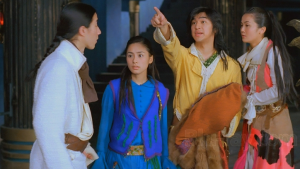 A very strange experience indeed, this movie with the working title of “The Huadu Chronicles – Blade of the Rose” released also under the name of “The Twins Effect II”. The movie is really more of a theater play and is probably very Hong Kong.

I quite liked it once I got past the theatrical setup that is unusual for movies from other sources that we usually see. It is very touching, very entertaining and very beautiful with a stunning cast. The story is fairly simple and the plot is straightforward but that does not diminish the pleasure of watching the play. The movie is full of excellent martial arts demonstrations but, frankly, I was so involved with the romantic side of the things that I nearly forgot it was an action movie.