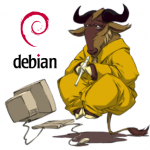 Well, I tell you what. The MariaDB is not transparently compatible. It breaks things that rely on MySQL. This must be mentioned in the upgrade notes! In fact, this is the kind of change I should see before the upgrade in large letter across the screen:

WE WILL CHANGE THE DB! IT WILL BREAK THE SYSTEM!

That was a major problem and took me some time to fix – removing MariaDB, cleaning data directories, installing community edition MySQL, recovering the database and finally, the mail server agreed to start up and operate. Users would not have been amused, I tell you.

Now a few other smaller things and annoyances that I came across and how to fix them.

Postfix log lines look different, so you’ll have to rewrite your rules for logcheck to ignore the normal operational messages. That’s okay, we are used to this, just shrug and get moving.

Vim has become a nightmare suddenly, I could not just Unix style select and paste with the mouse, it kept switching to this idiotic visual mode. It turns out that vim now loads defaults from defaults.vim and those defaults override the defaults you set in your vim.local. How cool is that?

faill2ban has received a seemingly innocent rewrite of the options but your jail.local file will not work. Best to install the fail2ban from scratch and add your customizations to a fail in jail.d/ directory as advised. Mind you that if you enable any of the jails for the email – the default configuration will try to use a service “imap3” that does not exist, of course, breaking things for you again, kudos to the maintainer. Use the port line for each such block:

Interestingly the mail filter clamav did not upgrade well and kept recommending me to head over to their website and read all about upgrading like if it was still running an old and outdated version or something. Purging it completely and reinstalling was the solution to clamav mail filtering.

If you decide to upgrade and you have MySQL on your server, make sure you do something sensible about it before the upgrade. Either set up a community edition or dump the data and uninstall. I think it is better to install your DB and populate from scratch than to try to migrate it, frankly.