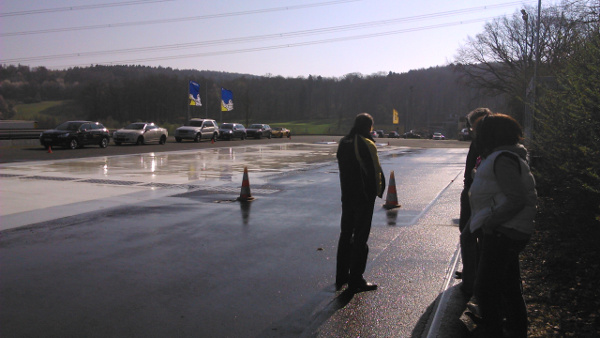 I was not expecting much from Renault Koleos to begin with and it performed basically all right, but besides having really bad breaks, only marginally better than Lotus Elise, it developed a strange problem in the morning: it would always try to go sideways whenever the driver used the breaks really hard. That was weird and we could not understand what is wrong with it. What is wrong became apparent later when the front wheels of the Koleos lost ABS. A couple of exercises later the car had no ABS at all anymore. So, you see, the ABS started to fail on a single wheel and the car was, of course, going into a slide on that wheel, making the whole assembly skid. Once the ABS failed completely, the car became apparently more stable. Frankly, I would not want to have that kind of “technology” in my car.

But, overall, cars performed splendidly and most drivers were happy to learn a thing or two. I was particularly impressed with the breaks on this small new Fiat 500 and with the sideways stability and recovery of the Hyundai i30. Skoda Fabia predictably lost a few plastic parts during the harder shake-ups but otherwise performed on par with everyone else.

Interestingly, the driver of this old Nissan did not know that she had no ABS at all until the first time she had to break hard. That did not interfere with her driving in the least though.